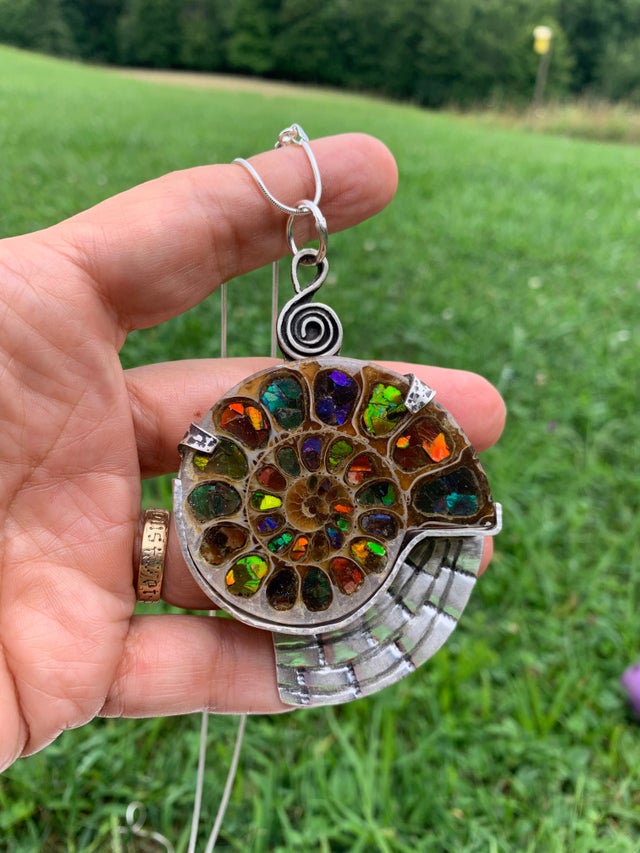 Spectacular is one word that could be used to describe this pendant titled 'Somewhere' Called so because it reminds of all the dreams, blessings and hopes of the past and the future, kind of like somewhere over the rainbow!

This ammonite is one of the best stones I have ever worked with. Set with ammolite, that in certain conditions, forms on the fossilized shell of the ammonite, it sparkles with color and power. I wanted the setting to speak of the stone, so I continued the chamber like pattern into the silver drawing your eye around and around again through the colors. Many people have thought this was Opal set into the stone, but it is Ammolite. It only seemed fitting that is should be used since Ammonite is where it is created.

I just hung it on a simple silver chain. I tried other things but the simple chain worked the best, letting the pendant do the talking.

I search high and low through many suppliers to find my stones. I worked with a lot of smaller companies who are doing all their own stone cutting and polishing. These stones are top notch quality and are not cheap in any way. That is reflected in the price.

A little bit of history---

Ammolite is only found in the Bearpaw Formation, which extends from Alberta to Saskatchewan in Canada and south to Montana in the US. The best quality of Ammolite is found along the high-energy river systems on the eastern slopes of the Rocky Mountains in southern Alberta. Most of the commercial mining takes place along the banks of the St Mary River south of Lethbridge.

Certain hues, like crimson, violet, and gold are very rare and in high demand, while greens are more common. And yes, for those of you who know of ammonite this is that on steroids.

Made in the heart of Appalachia