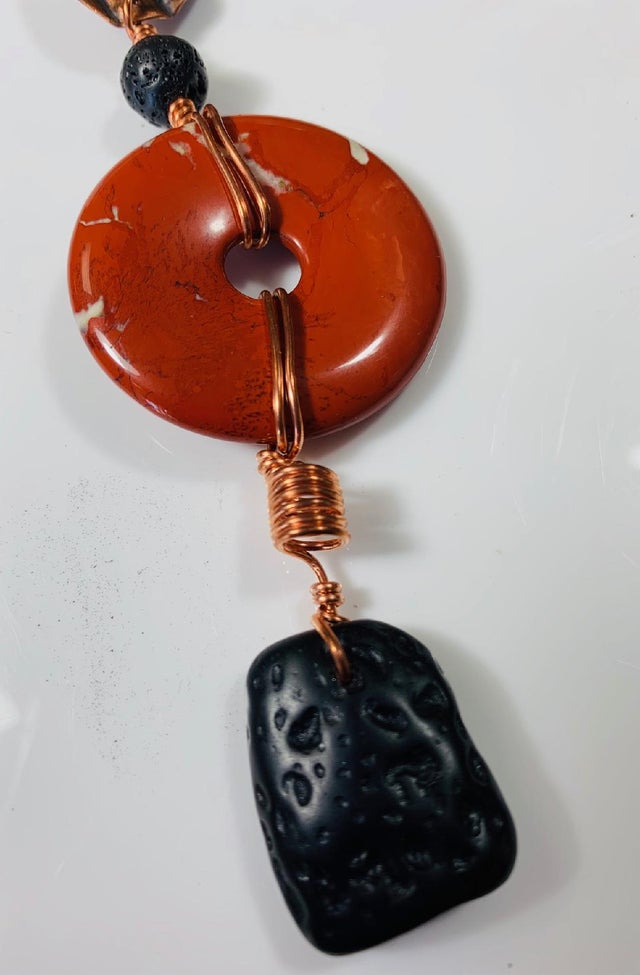 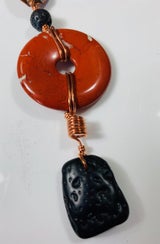 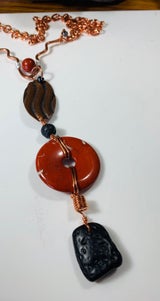 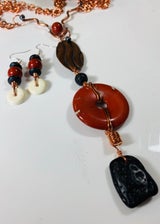 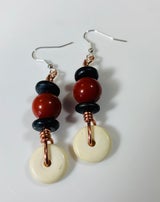 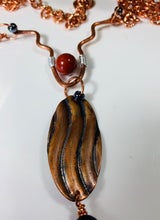 This is from my Earth Elements collection. Red Jasper is such a beautiful Earthy red color and this piece is wonderful. Adorned with Tektite off the bottom makes it a magical piece. Tektite is what is formed when a meteorite hits the earth and has a glassy appearance. Also making an appearance on this piece is lava.The copper was cut and patterned by hand, rounding out this one of a kind work of art. Fun to wear and a statement piece, this will be noticed!

The pendant is long and stylish, the copper chain slips over your head, doing away with fussing with a hook. Looks great over a sweater or blouse. The pendant focal is 8 1/2" in length, the chain is 22"

It comes with a pair of matching earrings, so for one price you get both.

Read below to understand the magic of copper and Red Jasper,Lava and tektite!

This piece was Created by International Jewelry Designer Christine Keller in her studio in the midst of Appalachia. To read more of her story go to her about page.

Red Jasper- This is said to be a stone of health, strengthening and detoxifying the circulatory system, the blood and the liver. Said to dissolve blockages in the liver and bile ducts. Also used as  a stone of empowerment, bringing strength to resist emotional domination by others, and the courage to overcome domestic violence. It also sustains those in the process of healing and recovering from violent sexual experiences. Red Jasper is a perfect stone of courage and strength for a child being teased or bullied at school. It is a bright, tangible reminder and a great confidence builder.

Lava- These stones are found all around the world and are one of the oldest and most abundant minerals on Earth. Its origins play a key roll in the stone’s healing properties. Lava Rock is famous for its grounding and calming qualities that can teach us about depth, intensity, and change.

Tektite- Tektites, due to being a product of extraterrestrial phenomena, are associated with worlds outside our own. They are believed to facilitate communication with otherworldly realms and encourage spiritual growth. In some traditional societies, tektites are worn to promote fertility for both men and women.

Although not a birthstone, tektite is affiliated with the zodiac signs Aries and Cancer. It is often associated with the third eye chakra.

Tektite is not really a gemstone--it's a form of natural glass (much like obsidian) caused by heat. Rather than the heat being from volcano's, however, the heat that makes tektite comes from atmospheric friction. Meteorites enter the planet's atmosphere and are pulled down by gravity--the friction caused by moving through the atmosphere at hundreds of miles per hour builds up heat in the meteorite. When the meteorite impacts, it spends that heat energy (and usually itself) into the local rocks. This causes the rocks to melt with the remains of the meteorite, creating tektites.

Copper and Brass- The Magic Metals

If tradition is to believed, these metals have healing properties. Copper is allegedly a strong conductor of energy, and an aid for exhaustion. This makes sense as it is used for electrical wiring. Copper is also supposed to detoxify the body, drawing the toxins from your system through the skin where the copper is worn. These therapeutic properties are evidenced by oxidation, turning your skin green when the piece is not sealed. I have been told by countless customers, that it does indeed relieve arthritis pain. Not only does Brass have the same benefits as copper, but it is also said to assist in healing the skeletal structure, and is conducive to spiritual and mental healing, self-discipline, and strength. Recently it has been discovered that most germs cannot live for more than five minutes on copper versus 72+hours on stainless steel!